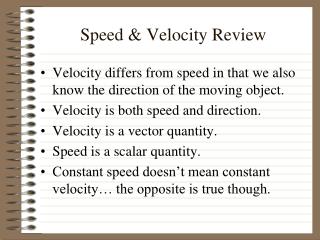 Speed & Velocity Review. Velocity differs from speed in that we also know the direction of the moving object. Velocity is both speed and direction. Velocity is a vector quantity. Speed is a scalar quantity. Constant speed doesn’t mean constant velocity… the opposite is true though. Speed. Speed, Velocity, and Acceleration - . “i feel the need, the need for speed!”. speed. speed, velocity, and

Physics Final Review - Scalar vs vector. scalar - only has value ie. heightvector has value and direction. speed and

Measuring Motion: Speed and Velocity - . this lecture will help you understand:. motion is relative speed : average and

8.6B Speed, Velocity, and Acceleration - . on level notes. you will learn:. state objective : differentiate between

Chapter 3: Position, Speed and Velocity - . 3.1 space and position 3.2 graphs of speed and velocity 3.3 working with

Velocity and Acceleration - . speed vs.velocity. speed (s) is the distance an object travels per unit of time (rate).

LINEAR MOTION - Review. linear motion. what is it called when the speed of an objects changes?. acceleration. what’s

Kinematics - . description of motion. linear motion. motion in a straight line can be described using speed or velocity

Speed vs. Velocity - . reviewing key concepts pg. 347. 1a. what is speed? speed is distance traveled per unit time. b.