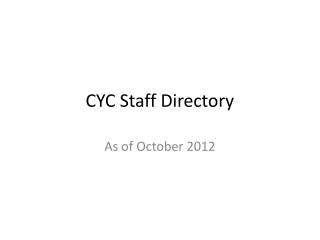 CYC Staff Directory. As of October 2012. Gina Roberts – Room 121. Gina joined the staff in August of 2011. She has an Associate Degree in Early Childhood Education and has enjoyed working in the field for the past 17 years.

File Manager Unit 1 Section 2 - . what is file management? why is it important?. what is meant by “hierarchal

The National Directory for Catechesis - . an introduction for parish catechists and catholic school