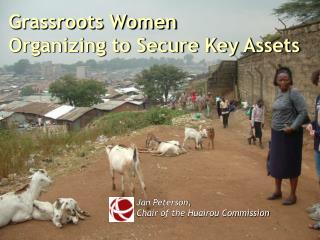 Grassroots Women Organizing to Secure Key Assets. Jan Peterson, Chair of the Huairou Commission. Why land matters for women. Land is a vital asset for ensuring women’s security and empowerment. Just ensuring employment is not enough.

Raising Our Voices: An Advocacy Summit for HIV-positive Women - . the significance of 2012 thursday march 7th, 2012

Voice, Visibility and Validation Organizing home based women workers - . informal workers consist of 93% of the workforce

Grassroots 101 - . get politically active for animals!. what is grassroots advocacy?. an organized effort by citizens to

Grassroots Soccer - . all football which is non-professional and non-elite is defined as grassroots (all children’s

ORGANIZING - Plan organize control lead. organizing. organizing is …. a process of arranging people and other resources

Capital Assets - . capital assets are…. assets used in the operations of a company and have a useful life of more than

Overcoming Barriers to Women in Organizing and Leadership Report to the AFL-CIO Executive Council March 2004 - . where