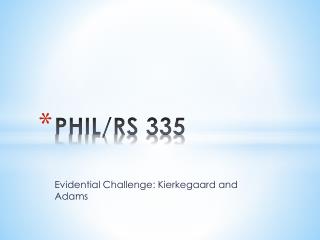 PHIL/RS 335. Evidential Challenge: Kierkegaard and Adams. Kierkegaard spent the majority of his life in his hometown of Copenhagen. Despite this provincialism, his impact on the history of philosophy and religion was profound.

PHIL 320 Something Great/tutorialoutletdotcom - For more classes visit www.tutorialoutlet.com setting aside the question

God’s Omniscience - . introduction. how can a finite mind comprehend an infinite being? the psalmist was correct in

PHIL/RS 335 - . the evidential challenge. flew, “ the presumption ”. flew begins with a distinction fundamental to

Recent versions of the Design Argument - . so far we have considered the classical arguments of aquinas and paley.

The Nature of Divine Revelation - . galatians 1:11-12. 11 but i certify you, brethren, that the gospel which was preached

PHIL/RS 335 - . divine omnipotence. why would people be concerned to specify the nature of the divine? what are they

The Mickey Mouse Guide to the Ontological Argument - . only the fool hath said in his heart that there is no god!.