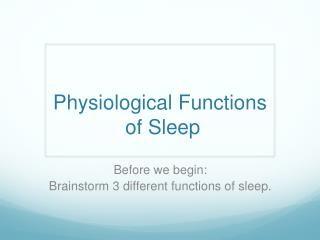 PATTERNS AND FUNCTIONS OF SLEEP - . gaurav moghe department of biochemistry the maharaja sayajirao university of baroda.

THE PHYSIOLOGICAL AND BEHAVIORAL CORRELATES OF SLEEP AND DREAMING - . outline 1. three psychophysiological measures of

Physiological Ecology of CAM - . undergraduate level notes. “rationale” behind cam. in addition to the benefits

EFFECT OF PHYSIOLOGICAL FLUIDS - . biocompatibility plays a very important role on deciding the life of biomaterials. a

Physiological effects of massage - Massage therapy offers several physiological benefits for your body. it is indeed a

Physiological Roots of Psychology - . the zeitgeist of the 19th century. the nature of the observing organism methods of

Physiological Principles of Training - . needs of youth athletes. expectations. turn off cell phone if you have to take a

Physiological Bases of Behavior - . the physiological basis of behavior rests on the actions of the nervous system