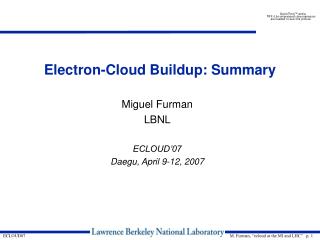 Electron-Cloud Buildup: Summary. Miguel Furman LBNL ECLOUD’07 Daegu, April 9-12, 2007. Disclaimer. This is not a comprehensive review of the talks Rather, items that I found especially noticeable My apologies if I don’t mention your contribution. New and/or improved measurements. Cloud - . does the ‘cloud’ have a silver lining? gareth eason. summary. should i care about cloud? yes! will cloud

Galaxy Buildup in the First 2 Gyr: The Evolution of the UV LF from z~8 to z~4 - . rychard bouwens (university of

Mr. Mark Calvo - . director of the government of guam military buildup office. purpose. to provide an overview of the