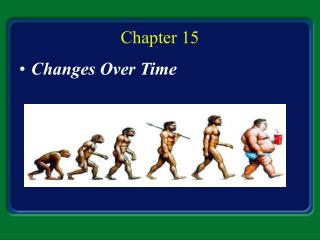 Chapter 15. Changes Over Time. Chapter Intro-page 392. Chapter 15 The Theory of Evolution. Why its important: Evolution is the key concept to understanding biology It explains the ____________ of species and predicts ______________. diversity. changes. New Vocabulary.