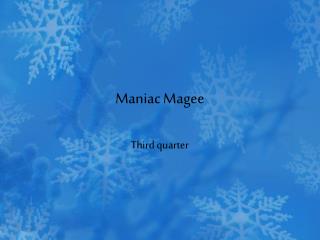 Maniac Magee. Third quarter. Previewing Maniac Magee. Read the title, the author, and look at the illustration on the cover. What do you think the book will be about? Where and when do you think it takes place? Have you ever read any other books by the same author? . Homelessness.

WRINGER - . by: jerry spinelli. chapter 1 &amp; 2. the main character in the story is named palmer. his parents want

Maniac Magee - . reading guide . before the story . what images stand out in your mind from the author’s description?

Maniac magee quiz - . in this quiz, we will see how much you know about the nove l. question 1: who does maniac bring to

Maniac Magee By Jerry Spinelli - . questions for chapters 1-5. 1. how did jeffrey magee become an orphan? a. his parents

JERRY SPINELLI - . jerry spinelli has written over 20 books for kids of all ages, including everybody, fiction, and

Maniac M agee - . by jerry spinelli. chapters 1-5 questions. 1. how did jeffrey magee become an orphan?. a. his parents

Maniac Magee Jerry Spinelli - . marquel pinder . what is it? in this story of maniac magee there is a boy who parents has

with Dr. Mike Magee - . will i be more disabled than my parents?. parents and grandparents of current baby boomers