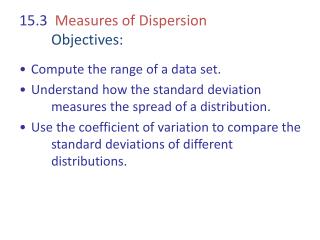 Chapter 15 - . solutions. 15.1 what are solutions?. a. characteristics of solutions 1. solutions are homogeneous mixtures

Swedish experiences of applying the Quality Objectives for NO2 and PM10 modelling - . introduction model evaluation for

Section 3.4: “Measures of Position and Outliers” - . calculate and interpret z-scores interpret percentiles and

Chapter 2: Descriptive Analysis and Presentation of Single-Variable Data - . chapter goals. learn how to present and

Total Internal Reflection - . refraction (bending) of light. sunlight shines down into the water ray a comes from