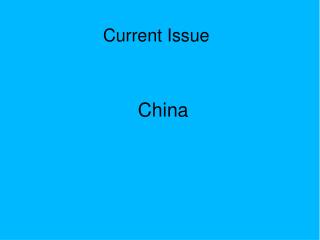 Current Issue. China. Current Issues. “Creating a stable foreign-currency regime that doesn't give an edge to one country or another "is the central existential challenge of cooperation internationally," --- Treasury Secretary Geithner in remarks to Brookings Institution.

Environmental Issues in the Philippines - . the philippines. 90 million people 7,104 islands directly in the vicinity of

Law 243 Current Legal Issues: The use of force in international law - . introduction and background - the nature and

Feature Articles - . they focus on one issue or topic. they comment in depth on one current issue or other subjects that

Current Issues in Subcontract Management and Compliance - . we’re drowning in information and starving for knowledge.

Current Issues in Clinical Psychology - . chapter 3. models of training in clinical psychology. the