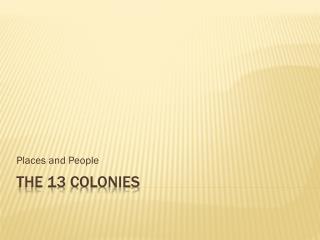 Places and People. The 13 colonies. People to know. John Locke English Philosopher Beliefs Personal liberty could coexist with political order Consent is the basis for government and fixes its limits; Government is a social contract with limited powers The 13 Colonies - . why were they established and settled? usi.5a. roanoke island/ the lost colony. on the coast of north

The 13 Colonies - . by: julia sullivan. the southern colonies. maryland. maryland was founded in 1632 the founder of it

THE 13 COLONIES - By steven, luis, erin. the 13 colonies. why were the colonies founded. the colonies were founded for

The 13 Colonies - . jaelyn a. regions &amp; what made them unique. southern colonies farming rice indigo

13 Colonies - . life in the. countries in the north america. spain france sweden holland england. by the 17 th century.