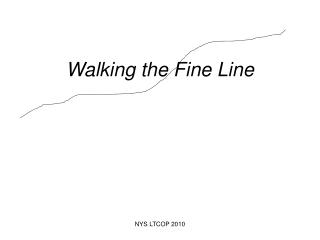 Walking the Fine Line. Thin Blue Lines…. I keep a close watch on this heart of mine. I keep my eyes wide open all the time. I keep the ends out for the tie that binds Because you're mine, I walk the line. “I Walk the Line.”. Residents &. Staff. Walking the Fine Line Between…. Walking the line with the Rules

Walking the Line: The Math Spectrum - . mathematics, grades 6–12. essential questions:. what is the relationship

The Use Of Belotero For Fine Line Reduction - As we age, wrinkles and fine lines start appearing. even though this is

NCEES Overview and Finding the Fine Line Activity - . ncees challenges. think, pair, share what are 3 challenges you have

Richard Long, Line Made By Walking , 1967 - “in the sweat of thy face shalt thou eat bread, for dust thou art, and unto

The walking dead - . by malcolm bruley and hasan hussain. introduction

WALKING THE TIGHTROPE - . ‘and getting to the other side’. carrying others across. reader ministry. a servant

The Walking Dead - . i don’t own the walking dead i’m doing my own version. kiegan mcgovern . first

Walking the Talk - . market orientation in academic libraries a case study of queensland university of technology