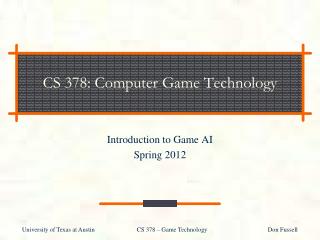 CS 378: Computer Game Technology. Introduction to Game AI Spring 2012. Today. AI Overview State Machines. What is AI?. AI is the control of every non-human entity in a game The other cars in a car game The opponents and monsters in a shooter