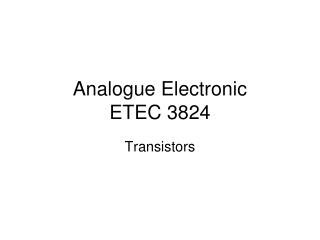 Analogue Electronic ETEC 3824. Transistors. Learning Outcomes. At the end of the lesson, students should be able to : Sketch and explain the operation of transistor circuits Describe the function of a transistor in various practical applications. The Junction Transistor.

HOW TO MANAGE Electronic EVIDENCE AND discovery - . agenda . why does electronic evidence require special attention?

Standard Grade Physics - . unit 4 electronics. exercise. label the following signals as analogue or digital. ( a ) ( b )

Rights of Users of Electronic Communications in the European Community - . barbara delaney 18 september 2013.

Telling the Time Success Criteria - . i know what a digital and analogue clock are. i know what the markings on a

Chapter 12 - . payment systems for electronic commerce. learning objectives. in this chapter, you will learn about: the

EC and the Virtual Corporation Session 2 - So what is electronic commerce? technologies (tools) methodologies