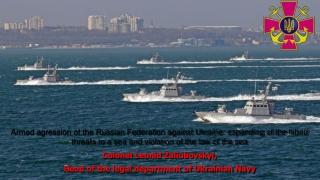 Armed agression of the Russian Federation against Ukraine: expanding of the hibrid threats to a sea and violation of the law of the sea Colonel Leonid Zaliubovskyi, Head of the legal department of Ukrainian Navy. Russian hybrid activities in the Black Sea region –