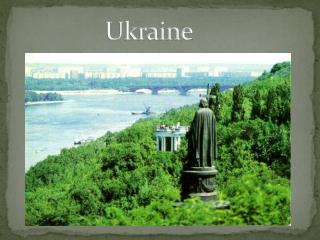 Ukraine. Ukraine on the globe. Kyiv is the capital of Ukraine. Carpathians is the biggest mounties in Ukraine. 449927853. Lake Synevir is the largest lake in the Ukrainian Carpathians. The Ai-Petri 's peak is located 1200 m above mean sea level. UKRAINE - . capital. the capital of uhrain is kyiv. ukraine population. the population of ukraine is 46,008,406 (july

Ukraine - . an in depth look at crimea. the ukrainian national

UKRAINE - Armed agression of the russian federation against ukraine: expanding of the hibrid threats to a sea and

Ukraine - . ukraine. data on organic agriculture as provided by the organic federation of ukraine. ukraine: development

Ukraine - . since august 24 , 1991 ukraine has become an independent state . dear visitor , you can enjoy some of the

UKRAINE - . tetyana shlikhar binghamton university. warm up. what do you know about ukraine? where is it located? what is

Ukraine - By: steven baez. ukraine. history. the ukraine was part of the former soviet union . its ethnographic territory