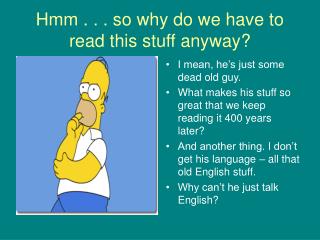 I mean, he’s just some dead old guy. What makes his stuff so great that we keep reading it 400 years later? And another thing. I don’t get his language – all that old English stuff. Why can’t he just talk English?. Hmm . . . so why do we have to read this stuff anyway?. Aliteracy in America - . the man who does not read good books has no advantage over the man who can’t read them. mark

Who is haruki murakami ? - . and what’s he all about anyway? and what’s this magical realism stuff?. have you ever

Count, Read: Succeed - . a strategy to improve outcomes in literacy and numeracy. aim. to highlight the key messages of