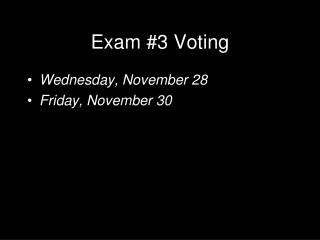 Exam #3 Voting. Wednesday, November 28 Friday, November 30. In the Beginning…. Today’s Talk. Talky stuff: In the beginning, science says… and God said … (by the numbers…) Do they say the same thing? Picture stuff: Exam - . 70-450. question. certkiller.com has hired you as a database administrator for their network. your duties