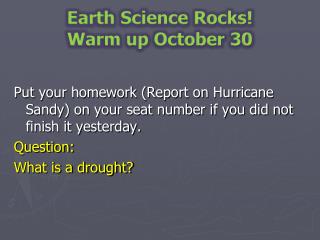 Earth Science Rocks! Warm up October 30. Put your homework (Report on Hurricane Sandy) on your seat number if you did not finish it yesterday. Question: What is a drought?. Pass your warm ups from last week and today to the front of the class. Hurricane Sandy 22N, 76 W. Sedimentary Rocks and the Production of Sediment - . sediment and rocks formed at the earth’s surface . sedimentary

Unit #2: Rocks, Minerals, and Resources - . rock - a naturally formed solid piece of the earth ’ s crust composed of a