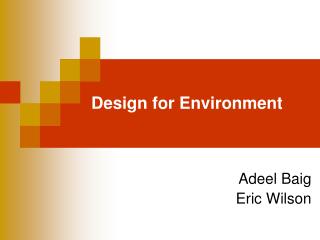 Design for the Environment - . a voluntary partnership-based program that works directly with companies to integrate

Design for Environment (DfE) - . there are now more than seven billion mobile phones in the world and only 1.3 billion

Design and Environment - Chapter 7. design and environment. learning objectives. in this chapter, you will learn to:

Design of Factory layout for Dynamic Environment - Introduction. currently existing layout configurations do not meet the

Implementation Strategy for an Architectural Design Environment - . issues in the development of idea+. stefan boeykens