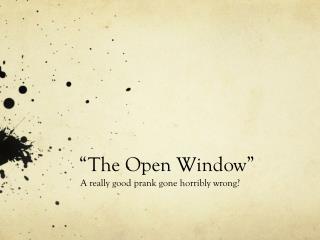 “The Open Window”. A really good prank gone horribly wrong?. Saki. This is the gentleman who wrote the story you’re about to read. Prediction (Remember what that means?) Take a moment to predict what the author looks like, and who he might be, based on his name. Surprised?. The Window - How to look at

The Tudor Window - . name. a henrytudor.co.uk production. this project makes a small cupboard for your wall that looks

The Window - . a young couple moves into a new neighborhood. the next morning, while they are eating breakfast, the young

The Open Window Saki - Characters . framton nuttelmrs. sappletonniece/vera three men and a spaniel . what is saki's

The Open Window By: Saki

The Hospital Window - . two men, both seriously ill, occupied the same hospital room. one man was allowed to sit up in

Open Window - . august 2012. open your heart to our community’s homeless

The wide window - . lemony snicket mackenzie wieand. about the author . he was born in san francisco ca, in february 28,

THE WINDOW 1 - Bookwormatron by joe hedinger. the window

The Open Window - . saki. goals copy only the most important words from the goals below. content goal- to make

The Open Window - . by saki. meet saki. 1870-1916 born of an english family in british occupied burma, india given name:

“The Open Window” - . by saki. bellwork. freewrite : has your first impression of someone ever turned out to be

The Hammer Window - . what is the question?. a hammer window has the shape of a rectangle surmounted by a semicircle. if