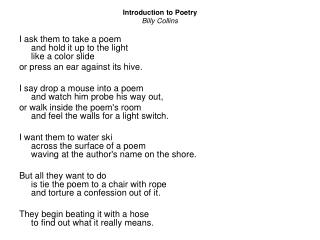 Introduction to Poetry Billy Collins I ask them to take a poem and hold it up to the light like a color slide or press an ear against its hive. I say drop a mouse into a poem and watch him probe his way out, or walk inside the poem's room and feel the walls for a light switch.

Billy’s Big Adventure - . author: kaylea stier. billy was at home one day and decided he wanted to go out for a bike

Poetry…Let’s start small - . day one january 8, 2014. “introduction to poetry” by billy collins. i ask them to

We Love Poetry - N. austin english 11. we love poetry. introduction to poetry. poetry deals with the intensity of human

Poetry &amp; Song - . english communications 11. what is poetry?. each of you has been given 1 quote about poetry

Some Days By Billy Collins - . by alex polednik. this poem is about a man who uses images of dolls and a dollhouse to

An Introduction to - . poetry. with. what is poetry?. webster’s dictionary defines poetry as language chosen and

INTRODUCTION to EPIC POETRY - . what is epic poetry?. long narrative poem written in an elevated style celebrates the