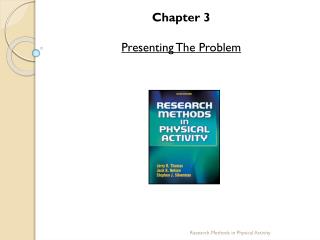 CHAPTER 3: The Economic Problem - . chapter checklist. use the production possibilities frontier to illustrate the

Chapter 3 The Economic Problem - . production possibilities curve (frontier): maximum amounts of 2 goods that can be

Chapter 3: The Reinforcement Learning Problem - . describe the rl problem we will be studying for the remainder of the

Chapter 3 – Problem Solving - . calls for reform repeatedly include the need to improve the teaching and learning of

The diagnostic model for a presenting problem - . questions to ask oneself: 1. what is the probability diagnosis? 2. what

Chapter 14 – Presenting the Product - . unit 5. 14.1 – presenting the product. selling an expensive product such as a

Chapter 3: The Magnitude of the Crime Problem - . crime reporting rates in the us and uk. reasons for not reporting crime