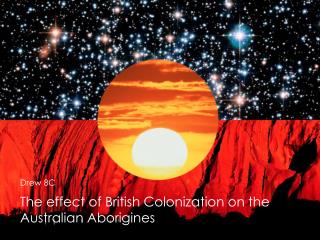 Drew 8C. The effect of British Colonization on the Australian Aborigines. Pre-colonisation. Before colonisation, Aborigines were semi-nomadic, moving with the food and seasons within a certain area. They were hunter-gatherers by tradition. There was no farming. Chapter 8C - . biblical creationism. the short-day theory. a literal interpretation each day (morning and evening) was a

Lesson 8C - . animation and events. step 3: animation. click on the knight in the object tree and scroll down until you

Drew - . the important thing about my

Drew Brees - . nothing beats a hampers diaper. kids who don’t use hampers are sad and depressed. kids that use hampers

Drew Britton - . what i like hunting and fishing. when i was little. i liked dallas cowboys. family. step dad-don

8c: Cold War - . the state of tension without actual fighting between the united states and the soviet union, which