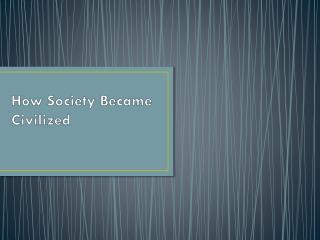 How Society Became Civilized. What is ‘Civilization’? . The word “civilization” comes from the Latin word for townsman or citizen, civis . To be “civilized” meant to be someone who was a citizen and was being governed by the constitution and legal statues of a particular community. . How did humans become civilized? - . what were we like? how did we change?. food, what would we do without it?. food is

WHO CIVILIZED WHO? - Europeans discover the new world. who civilized who?. civilization

How Prairie Became Ocean: Vocabulary - . recount. if you recount a story, you tell what happened. uninhabitable. a place

How Bitcoin Became So Popular - Bitcoin was the first digital currency to be created. the bitcoins trading is booming,

How Prairie Became Ocean: Vocabulary - . recount. if you recount a story, you tell what happened . uninhabitable. a place

Canada: The Civilized Outlaw - . canadian pro-choice slogans: “keep your laws off my body!” “this uterus is not

How Oedipus Became King of Thebes - . thebes was being plagued by a sphinx, a creature shaped like a winged lion, but

How Winston Churchil became the man - . who won the war?. good strategies:. while winston was in the army he picked up a

How to became a Female Rapper - On the surface area, the quantity of effort energy and time it requires to end up being a