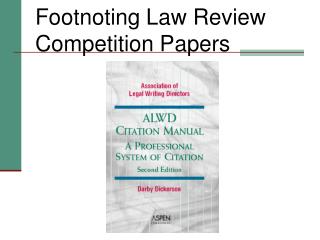 Footnoting Law Review Competition Papers. Preliminary Points. Look it up -- even if you THINK you know the answer. Guessing can be dangerous. Use the detailed index. Start with very specific terms. Move to more general terms and synonyms. Additional Tip.

AP Exam Review Competition - . first to finish calls “15 seconds”. answers must be written down &amp; then

TEAM COMPETITION - . a review for the test over unit 3a: the structures and functions of dna and rna. 1 point round. true

Chapter 7.1 Monopolistic Competition and Oligopoly - . the continuum of the market structure. perfect competition.

Enhancing Competition Awareness in DoD - . required training for all in the contracting career field. recommended