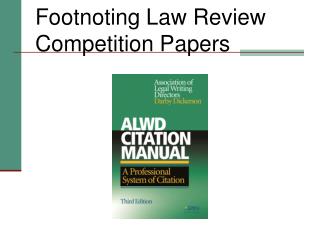 Footnoting Law Review Competition Papers. Preliminary Points. Look it up -- even if you think you know the answer. Guessing can be dangerous. Use the detailed index. Start with very specific terms. Move to more general terms and synonyms. Additional Tip.

TEAM COMPETITION - . a review for the test over unit 3a: the structures and functions of dna and rna. 1 point round. true

WRITING PAPERS AND GOING TO CONFERENCES - . gita subrahmanyam authoring a phd and developing as a researcher. outline of

CH 24 Review Game - . perfect competition. which of the following is not characteristic of a perfectly competitive market

Paleolithic and Neolithic - . unit 1. bellringer. practice walking in, picking up papers by the door and placing your

Lecture 9: Interspecific Competition - . eees 3050. competition. in the past chapters, we have been discussing how

Pure Competition and Monopolistic Competition Chapter 10 - . pure competition is a standard against which other market