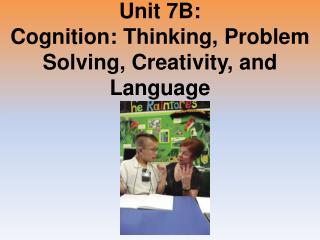 Unit 7B: Cognition: Thinking, Problem Solving, Creativity, and Language. Unit Overview. Thinking Language Thinking and Language. Click on the any of the above hyperlinks to go to that section in the presentation. Introduction. Cognition Cognitive psychologists. Thinking. Concepts. Symbolic Play Behaviors and its Relationship with Language and Cognition in Typically Developing Children. - Symbolic

MATH UNIT 1 - . 4 th grade. problem solving jacob helps at the family flower shop in the summer. he keeps a record of how