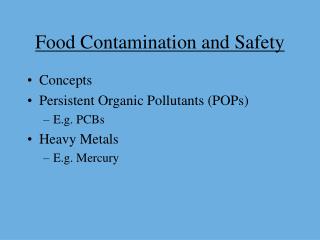 How to Prevent Cross-contamination - Take these simple food safety steps to reduce the risk of foodborne disease. if you Food Safety and Storage - . chapter #1. explain the relationship between microorganisms and foodborne illness.

Food Safety - . how to stay alive in culinary arts. contamination. what is contamination? when a food contains an

Food Safety and Personal Hygiene - . learning objectives:. after completing this session, the participant will be able