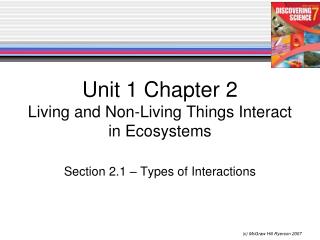 Unit 1 Chapter 2 Living and Non-Living Things Interact in Ecosystems. Section 2.1 – Types of Interactions. Symbiosis. Symbiosis: A biological interaction in which two species live closely together over time in a relationship where at least one of the species benefits . . Symbiosis (cont.).

Chapter 2 Principles of Ecology - . 2.1 organisms and their relationships. what is ecology?. oikos greek for

Interactions within an Ecosystem - . unit 1, topic 1. what is ecology?. ecology – the study of the relationship between

Needs of Living Things - . what do we really need?. needs of living things. can you remember the things that we really

Ecology: The study of how living things interact with each other &amp; their environment . - Abiotic factors : water

Chapter 3 How Living Things Interact - . outline. everything is connected components of an ecosystem producers,

Interactions Among Living Things Ch. 1.3 - . what do we know?. 1. all living things need water to survive. 2. all living

Living v. Non-living - . unit 1-1 notes mr. hefti – pulaski biology. please make a t-chart that is about half a page in

CHAPTER #1-INTERDEPENDENCE OF LIVING THINGS - . what is ecology ? study of the environment and its surroundings

Grade 7 Science - . unit 1: interactions within ecosystems. what is an ecosystem?. complete the activity on page 5: what

Interactions in Ecosystems - . habitat. all of the biotic and abiotic factors in the area where an organism lives. lion