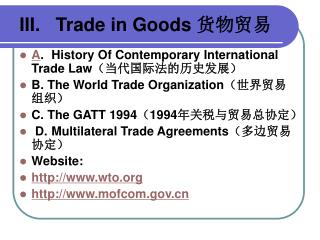 AUSTRALIAN CURRICULUM - . economics. australian curriculum. what we know the place of economics in the curriculum year

Trade patterns and global value chains in East Asia : From Trade in Goods to Trade in Tasks - . christophe degain, wto.

The Atlantic System - . the systems of trade connecting africa, europe, and the americas. triangular trade stage one:

Made in the World From Trade in Goods to Trade in Tasks - . andreas.maurer@wto.org. boeing dreamliner 787. source:

Notes on AKS 50 and 51 - . describe how georgians have engaged in trade in different historical time periods. trade is

The Global Economy - . unit vii get out your notes from yesterday!. benefits of trade. countries benefit from trade more

International Trade - . trade insights. trade=exchanging one thing for another. usually goods or services for $$. the

Trade Barriers - . eq: what are characteristics of the three types of economic trade barriers? how are they present in

Made in the World From Trade in Goods to Trade in Tasks - . andreas.maurer@wto.org. boeing dreamliner 787. source:

The Triangular Trade - . with the exchange of goods between ______ and _______, europeans developed a new trade pattern