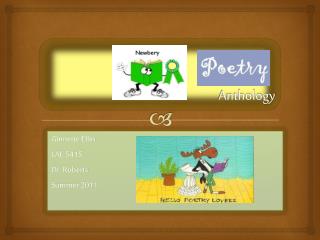 An Anthology of Fables - . a beggar was given a piece of bread, but nothing to put on it. hoping to get something to go

Poetry Anthology - . by matthew hockensmith or by shakespeare… whichever is more impressive. table of contents. - the

POETRY ANTHOLOGY - . emma orozco 7ºb. table of contents. poem “i am”. i am free and nice i think about what i like i

ANTHOLOGY OF POEMS - . by joshua clarke.

Anthology - . selected by: jeremy h. introduction. my theme that i have chosen is racism, i have been effected by this,

Poem Anthology - . stars ( free verse ). as i camp , i look upon the sparks that float in burst in the air. that leads me

Poetry Anthology Project - . by:carlee phillips. simile . flint an emerald is as green as grass, a ruby red as blood; a