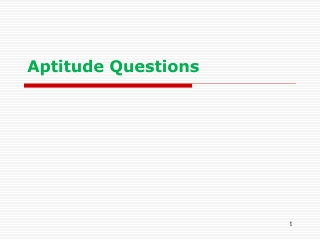 None of the Above: Behind the Myth of Scholastic Aptitude - . ch. 9: the cult of mental measurement . objectives. think

Vocabulary Book - . by: brianna d. aptitude. aptitude is the natural ability to learn something quickly and do it well.

Aptitude Test Online - Increase Thinking Capability - If you're now looking for a good job that best suits you, you

percentage questions and answers - For all types of competitive exams like cat, mat, gmat, icet and groups will be

Analysing 5 Years of CLAT - In clat, you will face 200 questions in each of the above categories, broadly as follows: