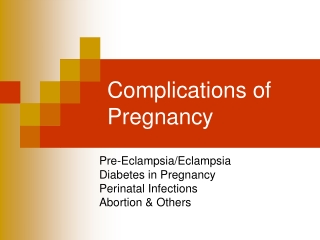 Management of Bipolar Disorder in the Perinatal Period - . christina l. wichman, do, faclp medical director, the

Common dilemmas in Pregnancy - . andy lindop. chickenpox. can cause problems for mum to be and her unborn incidence 3 in

ABORTION - . an abortion is the termination of a pregnancy by the removal or expulsion of an embryo or fetus from the

Complications - . antepartum intrapartum postpartum. maternal mortality. according to official us vital statistics, the