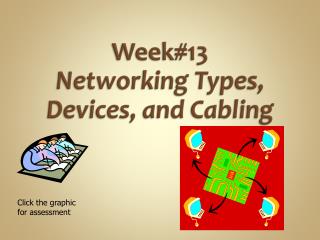 Week#13 Networking Types, Devices, and Cabling. Click the graphic for assessment. Objectives. Learn about network types and topologies Learn about the hardware used to build local networks Learn how to set up and troubleshoot the wiring in a small network. Network Types and Topologies.

Basics Of Networking - . created by devendra kumar. what is a computer network?. a network is a collection of computers,

Networking computers - . unit objectives: describe how various types of addresses are used to identify devices on a

These are devices that will connect you to a wireless network or a WAN environment. These devices are only quickly

SOHO Networking - . caskey l. dickson la-acm april, 2006. overview. what are they? why have them? how do you make them?