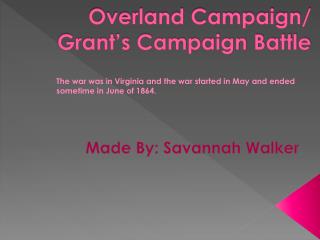 Overland Campaign/ Grant’s Campaign Battle. The war was in Virginia and the war started in May and ended sometime in June of 1864. Made By: Savannah Walker. The Overall Information On The Battle. The overland campaign fought against Confederate. Campaign Finance - . pols 125: political parties &amp; elections. “there are two things that are important in

Campaign Posters - . how to do it. create your poster in powerpoint save it “print” the file using acrobat distiller

Campaign - The. campaign . let’s save public schools!. let’s inform the media, politicians, and the general public

Our Campaign - . ‘more jobs for young people in leicester’. what are we saying?. we decided that we wanted to