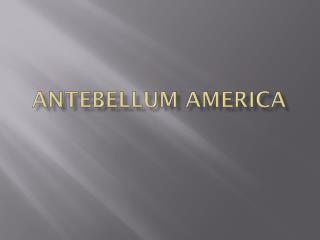 Antebellum america. Lead up to the Civil War. Manifest Destiny. The belief that it was God’s will that America spread west to the Pacific Ocean Most people believed this The country spread west with… Texas Mexican American War California Gold Rush Presidents supported people moving west. Antebellum America - . daniel kure. the age of jackson. (1824-1840). key tenants to jacksonian democracy. belief in the

Religion and American Society - . a product of antebellum america: the mormons week 5 – lecture 3. a product of

- Transformation of the Economy and Society in Antebellum America - . the transportation revolution and creation of a

OPENING: Describe the abolitionist movement. Why was it important during Antebellum America?

The Road to the Civil War - . trends in antebellum america: 1810-1860. new intellectual and religious movements. social

Antebellum and Civil War - . flashback tuesday 1-8-13. new flashback and exit slip procedure they will now be turned in