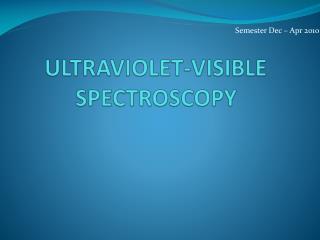 ULTRAVIOLET-VISIBLE SPECTROSCOPY. Semester Dec – Apr 2010. In this lecture, you will learn:. Molecular species that absorb UV/VIS radiation Absorption process in UV/VIS region in terms of its electronic transitions Important terminologies in UV/VIS spectroscopy. SPECTROSCOPY OVERVIEW - . this cycle is directed to astronomers develops through a logical path which goes from

Gamma Spectroscopy - . nucp 2371 radiation measurements ii. spectrometer. since electromagnetic radiation does not cause

Radiation Sensors - . chapter 9. introduction. we have discussed radiation in chapter 4 when talking about light sensors.

Applications of UV-Vis Spectroscopy - . molar absorptivity. we have seen earlier that validation of beer’s law is