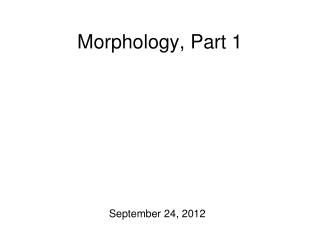 Morphology, Part 1. September 24, 2012. For Starters. The “Turing Test” Conceived by the English mathematician/philosopher Alan Turing (1912-1954). Turing developed much of the theoretical groundwork for modern-day computing machines.

Morphology - . a review. what is a morpheme? what is the difference between free and bound morphemes? what is a root

Morphology: Words and their Parts - . cs 4705. basic uses of morphology. the study of how words are composed from

Morphology, Part 3: Word-Formation Processes - . october 1, 2012. some announcements. #1: there will be no office hours