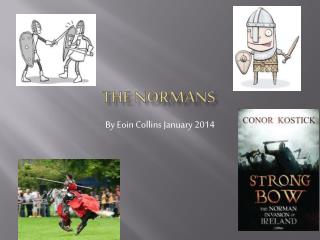 The Normans. By Eoin Collins January 2014 . When the Normans started invading Ireland.

Section Ⅱ The Anglo-Norman Period (1066 ～ 1500) - . middle english literature is a combination of french and

THE NORMANS - . the normans came from normandy in france. t hey were vikings !. castles. norman castles were built to

The Norman Conquest of England - . contents. i. anglo-saxons and vikings ii. the battle of hastings iii c onsequences.

The Normans charge and the Battle of Hastings has begun.

Introduction to Anglo-Norman History &amp; Literature - . the norman invasion the “invasion’s” linguistic and

The Normans - . by sean anthony. who were the normans?. the normans were originally vikings from scandinavia at the

The Normans - . introduction to the central middle ages.

THE NORMANS - . the normans came to govern england following one of the most famous battles in english history: the

The Normans - . the normans – contents. who were the normans? timeline dwellings food clothing &amp; travel battle

The Battle of Hastings (1066 a.d ) - . by: christian legg period 2. background. battle between the normans, led by duke

THE NORMANS - . at the beginning of the tenth century, the french king, charles the simple, had given some land in the