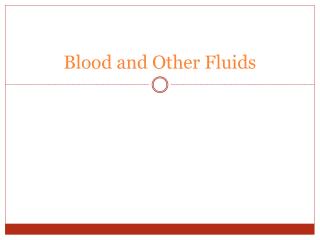 Blood and Other Fluids

Blood and Other Fluids

Bloodborne Pathogens - . microorganisms such as viruses or bacteria that are carried in blood and can cause disease in

ANNUAL BLOODBORNE PATHOGENS REVIEW INSERVICE - . welcome. annual training is required for all employees who can

DNA Is In All of Your Cells Body Fluids and Tissues - . blood semen saliva perspiration tissue bones and teeth hair (if

LESSON 7.1 FLUIDS EVERYWHERE - . fluids are materials that have no fixed shape and are free to flow, such as liquids and

Body fluids - . body contains many fluids differ in composition to meet their functions .the most important body fluids

What is a Clinical Laboratory Professional and What Are They Doing With My Body Fluids? - . division of medical