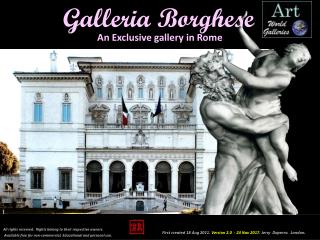 The Galleria Borghese is the home of an extraordinary collections of large number of unique masterpieces, dating from antiquity. In 1807 nearly all the archaeological collection was sold by Camillo Borghese to his brother-in-law, Napoleon, becoming an essential part of the Louvre collection in Paris. Some of the pieces sold have been replaced by later acquisitions. The gallery is uniquely located in the middle of a park, serenely blending architecture and nature. Recent restoration, which took over a decade of work, of the build was completed in 1997. Among it collections are half a dozen of paintings by the young Caravaggio, Titanâ€™s painting of â€˜Sacred and Profane Loveâ€™. Several works by Raphael, some of the best sculpture by Bernini, include the David, Apollo and Daphine etc. It is one of the world most exclusive gallery. Where in the World are Mr. and Mrs. Whiskers? - . at tip top enjoying the view?. at publix buying something for dinner?.

Stylish. Energetic. Galleria Destination - We are delighted that you have chosen the jw marriott houston as the site for