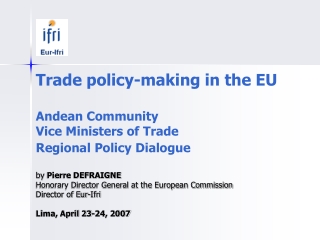 Trade policy-making in the EU Andean Community Vice Ministers of Trade Regional Policy Dialogue by Pierre DEFRAIGNE Honorary Director General at the European Commission Director of Eur-Ifri Lima, April 23-24, 2007. Introduction. Just a short reminder of what EU is about. Why the EU ?.