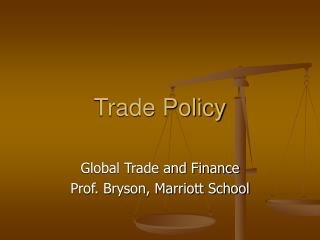 Trade Policy. Global Trade and Finance Prof. Bryson, Marriott School. Part I. Tariffs. A tariff is a tax, usually ad valorem (“on the value” or some percentage of the estimated market value of a commodity). It is imposed as a commodity crosses the frontier of the importing country.