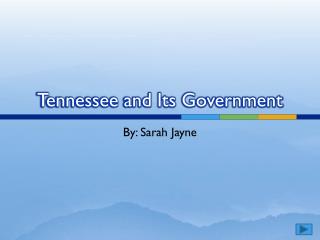 Tennessee and Its Government. By: Sarah Jayne. Directions. Before you begin this WebQuest fill out the “Know” and “Want to Know” sections of your KWL chart. Write about things you believe the state government does and what the people that live in Tennessee have to do.

Colonial Government and its Origins - . word wall words. democratic. in a democratic government the power rests with the

US Government its roots and beginnings - . the declaration of independence and the articles of confederation. what set

Kainuu Region and Its Self-Government Experiment - . congress of local and regional authorities, helsinki 30.11.2010.

Tennessee - . the geography of tennessee. its boundaries touch eight of its sister states. they are alabama, arkansas,

Tennessee - . www.tn511.com. tennessee. where we started pre-recorded construction hotline and a link off the tdot home

Tennessee - . a study of our geography, history, culture and economy mrs. stacy’s 4 th grade. geography: study of the

What is Government and What Are Its Functions - . mr. riley foundations lesson 1. civics: study of rights and duties of

MARKETING AND ITS ROLE IN GOVERNMENT CONSERVATION AGENCIES - . janice a. lansing, undersecretary louisiana department of

Tennessee - Sounds good to me!. tennessee. information for conducting entrepreneurial activities in the volunteer state.

TENNESSEE - . by abi,grayson,tommy, and elisabeth. s tate symbols are important t ennessee has many a raccoon just

Tennessee - . the three grand divisions. let’s play game: where have you been?. memphis? nashville? covington?