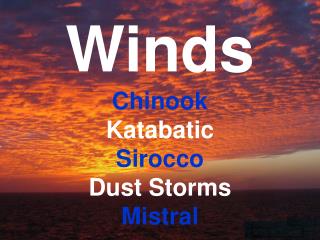 Winds Chinook Katabatic Sirocco Dust Storms Mistral. CHINOOK WINDS. What is a Chinook Wind? A Chinook is created when westerly winds blow warm and moist air over the Pacific Ocean towards the west coast of British Columbia.

Dust Storms - . by: diana moy. what is dust ?. earth, pollen or any other matter in finely powdered particles that can be

Quantifying Dust Bowl Storms - . by sean king me449 air quality. table of contents. introduction why was there a dust