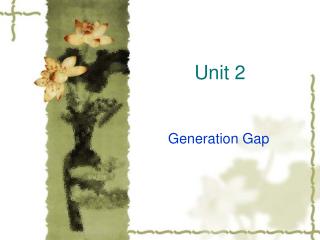 Unit 2. Generation Gap. Listening and speaking:. Listen to the passage, and try to understand the main idea of it. Edward: Chief Swan. I want to formally introduce myself. I'm Edward Cullen. Charlie: Hi, Edward. Unit 2 - . force. force – push or pull. a force always acts in a certain direction ex. if you push something, the force

Unit 2 - . grammar-translation method. pre-task. how does the method get the name? why is the method also called the

Unit 2 : - . resiliency and recovery: the vision and engaging the whole community. unit objectives. set the foundation

UNIT 2 - . definition of constitution. what is a constitution; funk &amp; wagnall’s standard college

Unit 2 - . earth's physical geography. our planet, the earth. how does the earth move in space? why do seasons change?.

Unit 2 - . the kinematics equations (1d equations of motion). day #1 introduction to the equation of motion. what are the