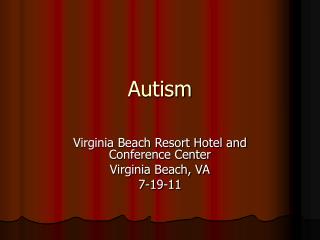 Ziggurat Model: A Functional Approach to Autism Planning - . overview of the ziggurat model and the comprehensive autism

Behavioral Approaches to Early Intervention with Autism - . wayne w. fisher munroe-meyer institute at the university of

Bio-Behavioral Approaches to the Assessment and Treatment of Autism - . wayne w. fisher university of nebraska medical

Autism - . by emily ramos. what is autism?. autism is a complex, developmental disability that is defined by 3 areas of