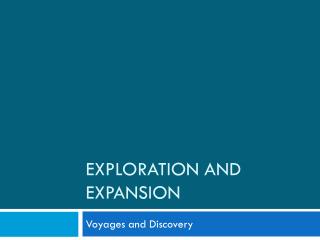 Exploration and Expansion. Voyages and Discovery. 1. Foundations of Exploration. The Drive to Explore Age of Exploration was driven by the search for wealth Many explorers hoped to find faster routes to Asia Some set out to find glory and fame Others to spread faith in new lands Overview of the gas and oil industry - . professor antal tungler 2004. topics of the module. exploration of gas and oil