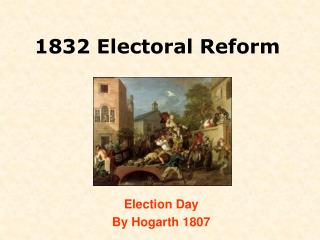 1832 Electoral Reform. Election Day By Hogarth 1807. The Whig government that took over in 1830, under Earl Grey, realised that some parliamentary reform was badly needed to take into account the changes that had happened in Britain.

The Growth of Democracy - . “how democratic” essay. plan:. we will examine the legislation that was passed under the Utilitarianism and Classical Economics - . utilitarian ethical theory has sources in greek and roman philosophy and in

The Great Reform Act 1832 - . background to the reform. elections pre-1832. who could vote? county seats men who owned

The Romantic Era 1785-1832 - . the romantic era. artists, philosophers, and writers rebelled against the age of reason

The Rise of a Mass Democracy 1824-1840 - . based on: universal white manhood suffrage. the new democracy. fueled by:

Religion Sparks Reform - . across the country, especially in the north, americans attended revival meetings and joined

Why did Revolutions take place in 1848 on the continent? Unresolved Political Rights Agricultural Conditions